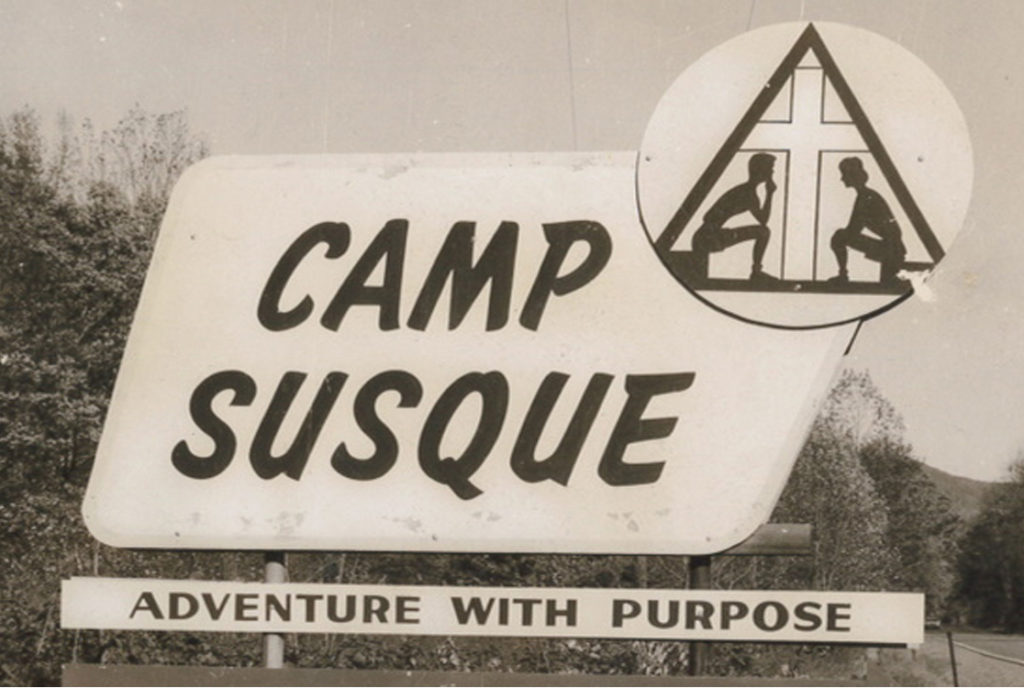 Camp Susque has a unique story that God has been unfolding for generations.

In 1946, four men took 16 boys on a two-night camping trip up the Loyalsock Creek. On the second night, around a campfire, the boys began to share some concerns from their lives which they had never voiced before that night. The leaders were overwhelmed at the boys’ response, and they began to discuss the possibility of starting a boys camp ministry. They dreamed of a camp where the teaching of God’s word would be inserted into a daily camp experience. Their heart’s desire was to lead boys to Christ who were not part of a church. In December of 1946, the leaders met to define the foundational goals and values for the ministry. The core ideals they agreed upon were:

With the goal to start a program in August the following year (1947), the leaders began raising funds and locating a cabin to rent. An affirmation from God came when Merle Brush, a gracious donor, agreed to pay the rent. By the spring of 1947 twenty-three boys were interested in coming. Teaching outlines from the Bible were prepared, but there was no cabin to rent. The leaders met and decided that if no place could be found then the whole endeavor would be dropped. As they all stood to leave (with the thoughts of not continuing in mind) someone suggested renting a nearby Boy Scout facility, Camp Kline. So they contacted a Christian man named Ramon Palmer who was active in Boy Scouts. As it turned out, Camp Kline was available to rent in August 1947. So the men moved ahead, believing God had a larger vision for this boys camp. That summer, twenty-three boys attended for a ten day session. The leaders followed-up with the boys through a small newspaper called “Hi Mate!” They also held spring retreats for local boys.

The second summer, fifty boys attended. In 1949, Al Jackson wrote the articles of incorporation for “Susque Boys’ Club, Inc.” This name was chosen as opposed to a “religious name” with the goal reaching beyond the walls of the church. The papers were sealed early in 1950. In 1951, the Boy Scouts were reviving their program and Bob Dittmar began to look for a suitable alternative to Camp Kline. Bob’s cousin informed him that John Bower’s land along the Lycoming Creek was for sale. John Bower and his son had their own vision for a boys’ camp so they were very interested. Mr. Bower agreed to sell the land for $10,000 and he held part of the mortgage at 4.5%. On the day the advisory board met to decide on the purchase, there was $250 in the treasury. The property was purchased in 1953, and the following summer Camp Susque moved to its new location. The camp emblem was designed in 1953 by Bob Christenson and Bob Dittmar. With continued growth in both attendance and facilities, the push was on to introduce a girls’ camping program under the leadership of Leethe Neeper, Edna Fessler, Hazel Palmer, Esther Dittmar, and Ann Kirk in 1956. Logically, the name was soon condensed to “Camp Susque.”

In 2022, Camp Susque celebrated 75 years of God’s faithfulness.  We’ve watched him move in the lives of kids, families, and our own staff.  Check out our 75 year documentary.  We’re excited to see how God works in the next 75!

How to get to Camp Susque

Interactive map of our buildings and property

How we use the gifts and finances entrusted to us.

How Camp Susque came to be

A camping experience at a whole new level.  Grades 6-12.

Special programs and classes throughout the year.

A regular podcast dedicated to all things Camp Susque.

Activities for the whole family

Donate to Susque's mission and help create experiences that last a lifetime.

Sign up for a work weekend to help us gear up for camp season.

A list of items that can benefit Susque's mission